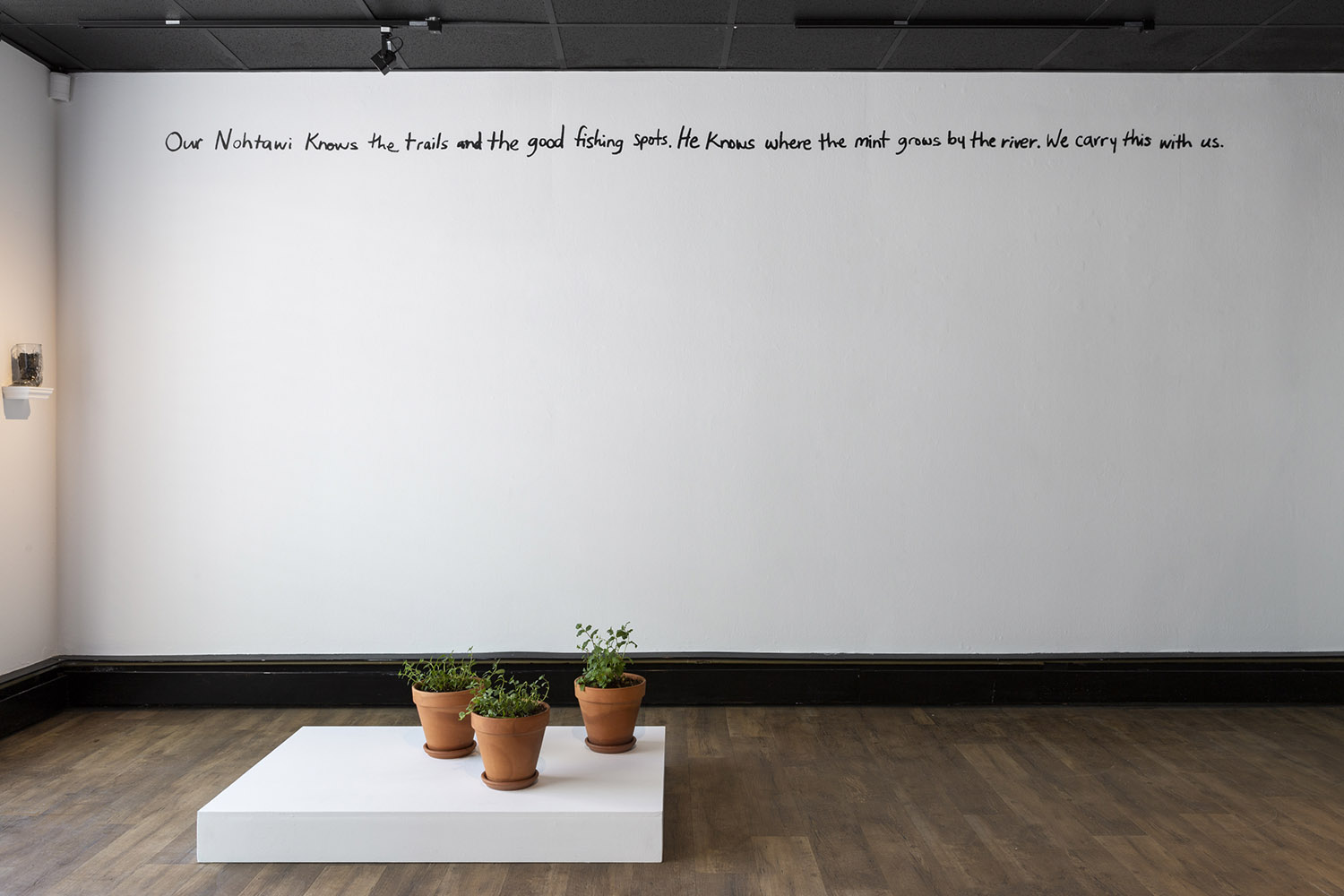 I believe in living

I believe in living takes its cue from Assata Shakur’s poem “Affirmation” that begins the activist’s 1987 autobiography. In it, she insists on the gifts of living in spite of the oppressive and violent logics of the state, and writes of the power of loving and imagining as radical counteractions to colonial, racial, sexual, gender and class-based injustices. Accordingly, the artists and contributors in this project carry these actions forward in each their own way, offering tender, caring, creative, poetic and intellectual propositions that examine different forms of living as complicated gestures and lived realities.

Using plant life as a starting point, the works in this exhibition explore the diverse ways in which plants represent: Indigenous and ancestral knowledges; sovereign resistance; cultural resilience; enslaved, colonizing and diasporic movements; as well as place-based rootings and relations. What does it mean for a cactus to have lived 800 years in the New Mexico desert, where the land has witnessed multiple statehoods? What does it look like to resist the Israeli State’s strategic excavation of olive trees—extraction as a form of settler-colonialism and a tactic of economic devastation—on Palestinian territories? In what ways do diasporic movements sever and/or carry land-based knowledges with them? How do contemporary greening and gentrification practices—including the aggressive re-financialization of the Albertan landscape—conceal the displacement of multiple histories, peoples and practices? How can a relational approach to place rather than to emplacement, reconfigure future environmental and familial relationships?

The exhibition features diverse works by local, national and international artists, in and outside the Untitled Art Society main gallery space, online, in the UAS +15 Vitrine and on billboards across the city. In the gallery: Rana Bishara's photographic installation of robust cacti growing in the West Bank provides a bird's-eye view of colonial occupation in the background; Christina Battle offers visitors seeds harvested from her Southwestern Ontario garden accompanied by semi-instructional zines to take away; sisters Richelle Bear Hat and Brittney Bear Hat present a collaborative installation with mint tea gathered from their ancestral territory along with personal stories; Abdi Osman's video projection of a woman reminiscing on the shoreline recalls the ways in which bodies, like plants, have been forcefully transposed across bodies of waters; and commissioned writing by scholar Rinaldo Walcott responds to these collective works, and is presented in the form of a textual installation.

Additional projects include Tiffany Shaw-Collinge's outdoor community garden with contributions from the artist and project participants, gallery staff, invited friends and family, and community members, which will grow from April until September. Basil AlZeri's site-specific installation for the +15 Vitrine space explores the intimacies between notions of “living to live” and “dying to live” over the months of April and May. Rehab Nazzal's images of environmental state-terrorism in Palestine will be presented on billboards across Calgary in April. Lastly, Christina Battle's Instagram take-over from July 16th to 27th will feature a rotation of animated GIFs that present possible futures not unrelated to our current uses of land.

Critiquing the politics of “greening” and practices of gentrification, both of which are tied to white supremacist colonial and capitalist systems, 'I believe in living' takes plant life as a critical symbol that is inseparable from Indigenous histories and agricultural practices that have existed across the world for tens of thousands of years. Accordingly, this exhibition challenges the colonization of land, culture, bodies and plants, and instead, offers alternative ways of being, and thus living, in the world.

Basil AlZeri is a Toronto-based visual artist. AlZeri’s practice involves the intersection of art, education, and food, and takes multiple forms such as performance, interventions, and gallery and public installation.

Media artist, curator, organizer and educator Christina Battle is currently based in London, Ontario. Her work considers the parameters of disaster, looking to it as more than mere event, and instead, as action: a framework operating within larger systems of power.

Brittney Bear Hat is a 2011 graduate from the Alberta College of Art and Design, where she majored in Painting with an interest in collage and drawing. Based in Calgary and of Blackfoot and Cree descent, Bear Hat makes work about memory and the relationship between personal history and Indigeneity.

Richelle Bear Hat is a Calgary-based Indigenous artist with Blackfoot and Cree heritage. She graduated from the Alberta College of Art and Design with a BFA in Drawing in 2011. Bear Hat worked at the Banff Centre as a Collections Work Study and is currently the Engagement Coordinator at TRUCK Contemporary Art.

Rana Bishara is an installation artist, painter, graphic artist, photographer and performance artist born in Tarsheha Village, Galilee, Northern Palestine. Previously, she was the Chair of the Visual Art Department at Al Quds University, and currently, she lives and works between Galilee and Jerusalem.

Rehab Nazzal is a Palestinian-born multidisciplinary artist based in Canada and Palestine. Her video, photography and sound works deal mainly with the violence of settler colonialism. She is currently a PhD candidate at Western University in London, Ontario.

Abdi Osman is a Somali-Canadian multidisciplinary artist whose work focuses on questions of black masculinity as it intersects with Muslim and queer identities. Osman's video and photography work has been shown in Canada and internationally in both group and solo exhibitions.

Tiffany Shaw-Collinge is an interdisciplinary artist, curator and intern architect based in Alberta. She holds a BFA from NSCAD University, a Masters in Architecture from the Southern California Institute of Architecture (SCI-Arc) and is a core member of Ociciwan Contemporary Art Collective.

Ellyn Walker is a curator and writer based in the area now commonly known as Toronto. Her work explores the politics of representation, collaboration and inclusion in the arts through critical feminist and social justice lenses.