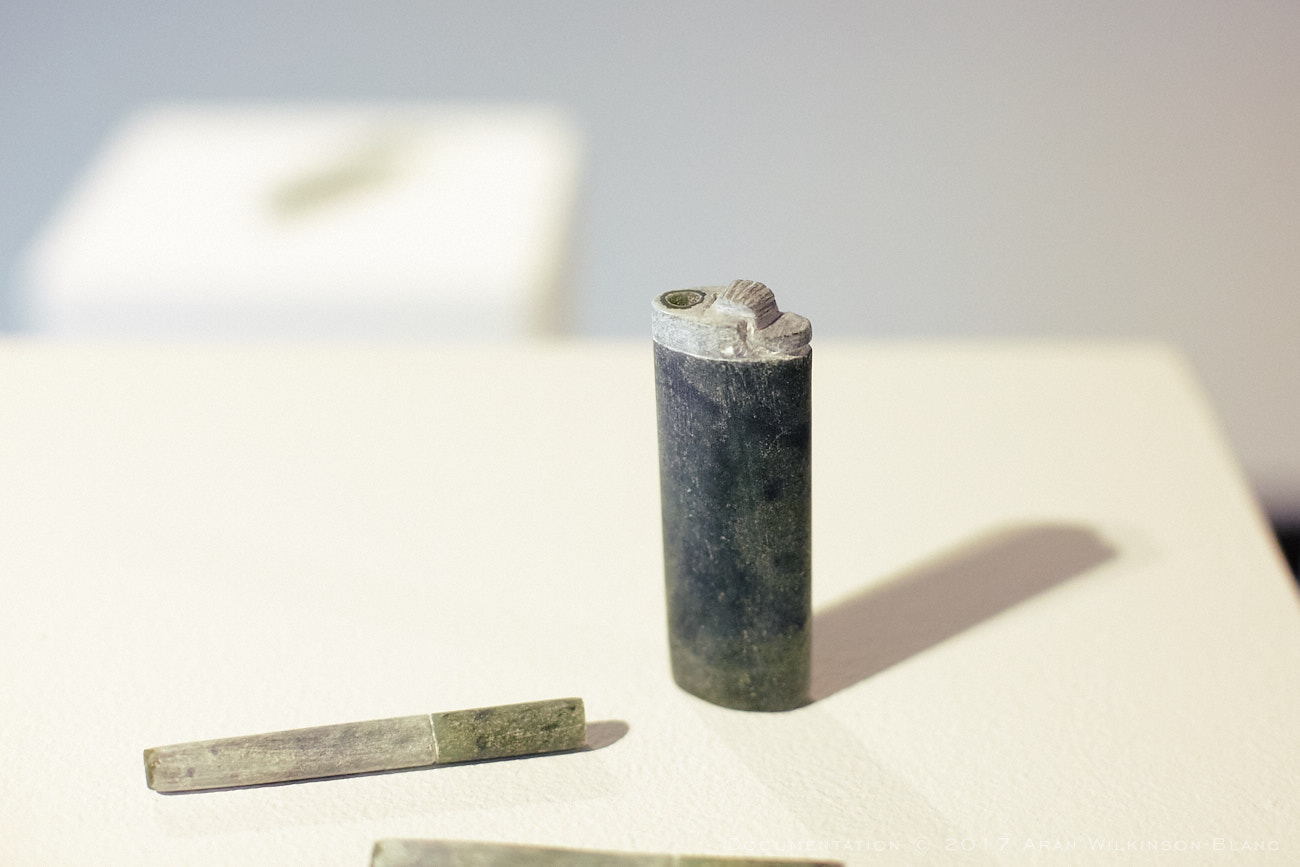 Uyarak//Stone is a series of contemporary soap stone carvings; it exists as a platform of Indigenous sovereignty, aims to question conventions of Inuit art, and challenges the notion of what it means to be an Inuit artist. "Uyarak//Stone" seeks to remind the viewer that Inuit are contemporary people existing outside the ethnographic, settler colonial gaze.

Jade Nasogaluak Carpenter (Kablusiak) is an Inuk artist based in Calgary, born in Yellowknife, and raised in Edmonton. She attended Grant MacEwan University, receiving a diploma in Fine Art and went on to receive her Bachelor in Fine Arts from the Alberta College of Art + Design in 2016.

Nasogaluak Carpenter uses art and humour as a coping mechanism to subtly address diaspora, and to openly address mental illness; the lighthearted nature of her practice extends gestures of empathy and solidarity. These interests invite a reconsideration of the perceptions of contemporary Indigeneity and counter the stigma surrounding mental health.

chloe frost
Been running as long as I can remember

Trying to make an abstruse condition easier to understand, Been running as long as I can remember takes the corny archetypical retro workout video and uses it as a metaphor for living with severe anxiety. With dark humor and some mild sarcasm, chloe frost aims to dispel some of the stigma surrounding anxiety, stigmas both external and internalized.

chloe frost (oualie beach) has exactly one coping mechanism: dark humor. Two, if we're counting art. Attempting to explore and understand herself and her world, chloe creates as a means to explain, experiment, and reconcile. please don't ask if she's tried yoga.

Secretive Density is an exploration of the clouding effects of transformative identities expressed via digital print media. Accessing and deploying soft aesthetics as a trans artist, the explosion and distortion of floral imagery reveals that behind the inferred illegibility of queer existences is a contemporary re-acquaintance with the beyond. Unsettling, undefined, and powerful in its re-purposing of known images, this beyond posits a view of the queer world as a shifting and uncertain one, a potential that cannot be ignored and which openly contests everything.

May G N is a Trans Albertan Artist who works with new media print technologies to produce work that is engaged with their personal navigation of territories that span the emotional, physical, and societal. Through the layering of image, text, and material, May presents scenarios where the viewer’s relationship with queer identities and the territories they inhabit and change are interrogated. Most recently, May has participated in exhibitions with Left Contemporary (Windsor, ON), Femme Wave Festival, and TRUCK Contemporary Art in Calgary.